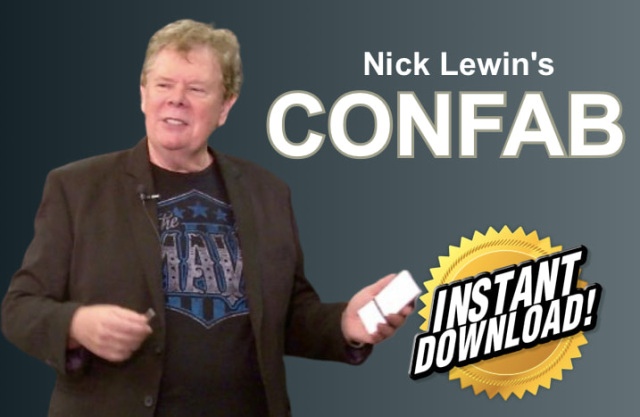 Our original routine has been simplified, streamlined, and is now available in this digital download.

(Download speeds vary by your own personal internet connection)

Add to Cart
(Download speeds vary by your own personal internet connection)
STRONG COMMERCIAL MAGIC THAT CAN BE PERFORMED ANY TIME,
​ANYWHERE FOR ANY AUDIENCE
A No Frills Release of Nick Lewin’s CONFAB
I have been perfecting a version of this great effect since the mid-’70s and it has been a highlight in my lecture since that time. I recently recorded a very comprehensive DVD that details not only my innovative and unique handling but also the powerful manner that I have shaped it as a versatile tool in booking corporate shows. My handling has eliminated many weak spots in the original routine and added some really fabulous touches that take the routine to a whole new level. By combining another entire magic principle into the handling the result is a routine that is so clean it will take your breath away. In this DVD I explain how to perform this effect using either a standard Le Paul style wallet or my “Le Nick” style envelopes.
So many magicians already own a “Card To Wallet” style wallet that we decided to do a no-frills pre-release of the effect that doesn’t supply a wallet and merely details how to construct, rather than supplying pre-made envelopes for the effect. We do however supply the exact, correctly sized, files for the Order Form that is integral to the effect. This allows us to make the effect a great deal more cost effective in this initial pre-release. Everyone hates spending money that is unnecessary, magic is expensive enough already; I strongly suspect that the majority of our clients will choose to use the wallet method.
One of the strongest and most versatile mentalism/magic effects in the marketplace is Alan Shaxon’s Confabulation and the many variations of it that have sprung up over the years since Ken Brooke released it in the ‘60s. The basic effect/method actually predates ​Alan’s routine and has it’s roots very clearly in George Grimmond’s routine “Triple Forecast” that Harry Stanley released in 1951 through his “Unique Magic Studios.” The major difference was the fact that Alan’s routine utilized a wallet instead of the double envelope system that Mr. Grimmond employed. This is the NEXT level!
Every Professional Mentalist Needs CONFAB in Their Arsenal
“A big thank you for your Confabulation, boy you have really sorted out all those little problems that used to bug me”
- Trevor Liley
“I have tried and used many versions, my favorite handling is Nick Lewin’s. Seriously designed for workers, using a concept you probably already know in an entirely different way. This is so real world. Strong stuff!”​
- Cory Haines​
“If you haven't bought it yet, any mentalist worth his or her salt should have Nick Lewin's Confab. Get it now.” ​
- Greg Raven ​
“Watched it last night. Watching it again tonight. It’s Great! I hope the final price is higher (I’ll even pay the difference) to keep it out of the hands of the merely curious,” ​
- Willard ​
“The first time I performed it was for a country club of very over-served, very wealthy people. When I read the prediction the entire audience said WTF out loud.. Easily the strongest effect in the show that night. I found it easy to perform since tit was so amazing and answered every question. Hats off to Nick. This effect Rocks” ​
- John Ferrentino ​
“Nick Lewin’s Confab really completes my show! It’s a piece of striking mentalism that gets a huge reaction AND fits in my pocket.” ​
- Jason Andrews ​
People who purchased this item also purchased